14/12/2020 09:38:53 AM
Change text size: defaultA Change text size: largerA Change text size: largestA
Introduction：
Praça de Ponte e Horta is an open space for leisure along the Interior Harbour in Macao. It is located in the western part of Macao Peninsula, lying in the northern area of Parish of São Lourenço. During the years spanning from the reign of Emperor Kangxi to Emperor Tongzhi of the Qing Dynasty, the location was a pier for the import of opium. It was also the first pier reserved for opium trade and for levying tobacco tax throughout the history of Macao and China, and has even been considered as the origin of the Opium War. In the late 19th century, the pier was turned into a spacious area due to land reclamation. After opium was banned in Macao, Praça de Ponte e Horta was vibrant at night with stalls serving tea and entertaining performances, and it was also once a market. Today, it has become a place for the recreation of residents. Measuring about 105m in length and 40m in width, the leisure area caters to users of different ages. It has a children’s playground, a pebble path, a variety of equipment for physical training and recreational purposes, and public toilets. 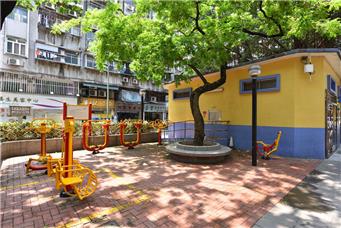